I think because of these times:

We are now experiencing these times: 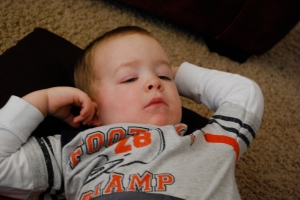 Ruby had a slight cold, but fought it off.  The other two have let it get the best of them.  We went to the doctor after two nights of not-so-great sleep for anyone.  Molly’s is probably just viral, but we got a prescription if the fever isn’t gone by Friday.  Mack had a flaming ear infection.  He told me last night when he woke up moaning;  I went in to check on him, and he said, as clearly as ever, “Mama, my ear hurts!”  Wow.  That was nice.  He told me exactly what the problem was.  Gotta love it when they communicate!  Sure enough, the ear was in bad shape.  We have medicine now and, hopefully, all will be well very soon.  In the meantime, Milk Duds and a movie seem to be doing the trick.

A shout out to Molly in the top picture—Did you notice she is riding her bike with NO training wheels???  I was literally “shouting out” to her from the back door each time she came around.  I wanted her to know I was proud of her, but I was not about to hang out in 20 degree weather.  No thanks!

One thought on “Consequences”