When Molly was a baby she slept on her tummy, all squished into a little ball.  She learned to suck her fingers….and she still does this from time to time at bedtime.  As she grew into a toddler, got extremely addicted to a certain pillow.  She would take the pillow case off of the pillow and slobber and suck her fingers at night.  Over time, this pillow began to look rough.  I would cover it with a pillow case.  She would uncover it.  It started turning a dark brown color.  I know, gross.  Ruby wouldn’t allow the pillow to touch her or anything that was hers.

One unfortunate night Molly got sick and threw up on her beloved pillow.  I was going to try and clean it up, but I just decided that maybe this was the time to say goodbye to her longtime friend (I do this with tupperware that has food in it that has overstayed its welcome in the fridge as well….not gonna clean that junk out…rather just buy some more tupperware). Of course, Molly wasn’t having it.  At all.  She was going to be devastated without her pillow.  So, plan B ensued.  I found another pillow just like the one she had; it was inside one of the “pretty pillow cases” that no one ever uses.  She was happy that I found another pillow, but she wasn’t thrilled that her loved-on pillow was now gone.  This new pillow would have to do.

She loved on and slobbered on this pillow night after night until it was as gross as the first one.  Mack and Molly had even written with marker on this pillow. Then, one day, the unthinkable happened.  Molly came to me and said she couldn’t find her sewing needle.

“I stuck it in my pillow and then went to the bathroom and when I came back, it wasn’t there, ” Molly said, in a panic.

I told her she would not be able to use the pillow anymore because if there was a needle inside the pillow, it could poke her at anytime in the night and maybe hurt her eye or something.

Once again, Molly wasn’t having it.  I was talking, but she was not listening.

Sooooo, once again I came up with Plan B.  I mean, that’s what moms do, right?  I told her we could cut open the pillow and get the needle out and then sew it back up.  We cut the pillow and didn’t find the needle.  Ruby entered the room and told us that, “Oh yeah, I saw that there was a needle sticking out of the pillow, so I took it out and put it in this drawer.”

Really?  Thanks for letting us know.

The pillow was already cut open and the stuffing all moved around as we carefully searched for the needle.  Then, I had another idea…Since the pillow was kind of in shambles, “why don’t we just cut out a smaller pillow for you to sew up?”

Molly thought it was a great idea.  The large pillow then looked like this:

As you can see, it is starting to open up on one end.  Enter another idea from good old Mom. “Hey, Molly!  Why don’t we turn that pillow into a doll?!”

She loved the idea and it gets the nasty pillow a little smaller. 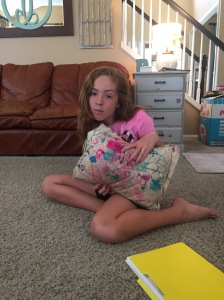 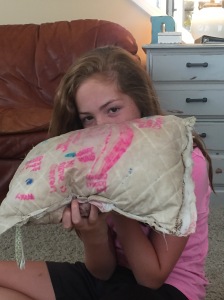 We started cutting and pinning, Molly went to sewing and this is the final product.

I know.  Scary, right?  But it is smaller.  Mack saw it and went into a long story about how he is going to have nightmares about that scary baby attacking him and then Molly will wake him up and ask him what he is so upset about and when he sees her standing there with that baby in her hand, then he will really be scared and will scream……and on and on he went.

But he has a point.  It is a scary baby doll, no doubt.

Obviously, she would disagree with us.  Oh, that Molly girl.