We had a wonderful Sunday!  Josh taught a great lesson from John 15, then we served in the nursery…only had 14 two year olds instead of 18 like last month.  THEN, our friends, the Barsh family, invited us over with the Koester’s for lunch and just hanging out.  It was so much fun!!!  The kids are really growing up.  They just ran off and played and played. (They played so hard that on the way home everyone fell asleep.  Molly put up a fight though and was rambling horribly…”I want to stay at Gigi’s house forever and ever.  I really do.  I want to go home and have my white slobber pillow.  And I, I want, um, I want Ruby to sleep in my bed with me…and I want to stay at Gigi’s house forever…..I want to slobber….”)  The three of us ladies had great conversation with minimum interruptions.  It was really nice.  A great reminder that it is so important to open up our home to our friends.

Yesterday, I went to a Baby Shower and then spent some time with Ruby at Wal-Mart.  She picked out a tea set and a book with the money that GG sent her in the mail for her birthday!  It was quite a decision, I must say.  She went back and forth between a Tinkerbelle doll, a play phone, an Etch-A-Sketch….and more!  Josh called and urged me to quickly help her make a decision because we had a picnic that afternoon with our Sunday School class.  The picnic was a lot of fun.  In between the little rain showers, the sun would peak out so that the kids could play and play and play….and play some more. 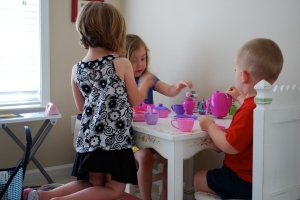 Here are the kids with the new tea set.  They loved playing together.  We will be giving GG a call after Josh wakes up from his nap to thank her for the money!

Today, however, Ruby got mad at Mack while playing tea party.  She said, “No boys are allowed.  He is gonna mess everything up!”  And sure enough, he was knocking over cups, grabbing things and just overall not being very graceful.  He needs a brother, but I can’t help him with that.

Here are some pictures from our Sunday morning.  We had time to spare, so I wanted at least one picture of all the kids since they were all in red, white and blue.  I was, too!  Josh didn’t get my red shoes in the picture though…I don’t know what he was thinking.  But I must say that I rarely match all three of my kids.  It is just too much pressure.  I sometimes make sure no one matches so that it doesn’t look like I wanted to pull it off but just couldn’t.  We all just do our own thing, usually.  And even Ruby managed to put on her pink shoes instead of her cute red ones that I wanted her to wear.  And Josh, when asked if he was going to wear red, white and blue, asked me “Why?”  I said, “Because we are all wearing red, white and blue.”  He said, “That’s exactly the reason not to then.”  Love him.  Such a rebel. 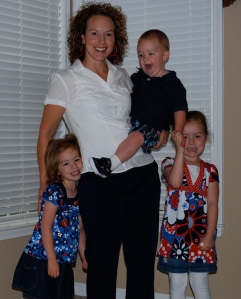 Wish you could see my red shoes.  Ha! 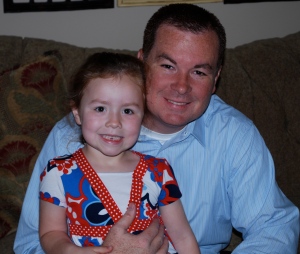 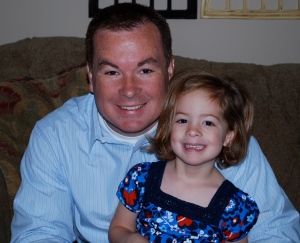 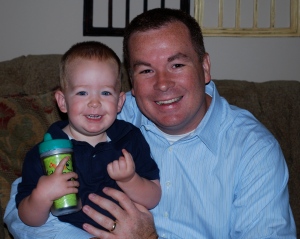 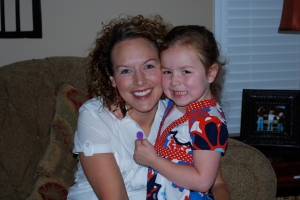 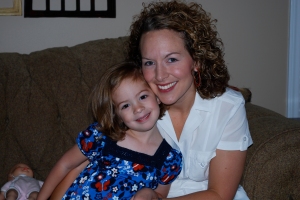 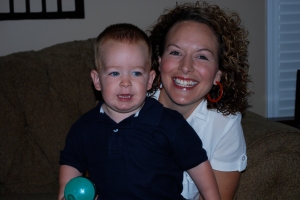