On Saturday, May 9th, the girls had their dance recital at the church.  It was a so sweet!  We couldn’t take pictures during the performances because I can’t get the no flash pictures to turn out great when everyone is moving all around.  It was nice to just sit, watch, and enjoy!  Here are some pictures from before and afterwards: 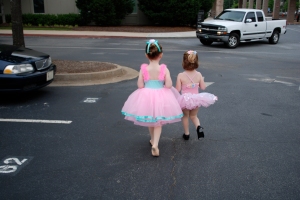 PawPaw and Sweetie came to see the girls dance.  Gran and PawPaw wanted to be here, but they had just come the weekend before to see us.  Her chemo date changed at the last minute.  We were sad that they weren’t here, but they will see the video very soon!!

We went to eat Mexican afterwards, then we all headed to Augusta to spend the rest of Mother’s Day weekend. 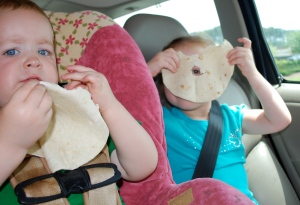 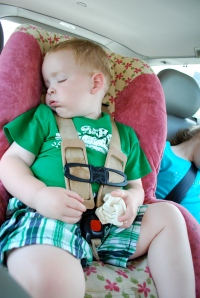 Mack and Ruby ate some left over tortillas in the car.  It looks like Mack was making his into a baseball!  Crazy boy.  He did very well during the recital, though he must have eaten a pound of goldfish crackers!

This is a picture of Molly during the rehearsal.   She was about this excited during the actual performance, too.

You could tell this was Ruby’s second year of dance…check out that form….she was basically a professional!  ha.

And, evidently, brothers of dancers were to wear camo pants and orange shirts and play with cars and roll around on the floor.  Atleast that is what these two did!  Oh, and eat another pound of goldfish crackers.