We went to Upward Flag Football’s End of the Year Celebration.  Mack was pumped to see The Power Team tear phone books and break concrete blocks and stuff.  Ruby said, “Even their muscles have muscles.”  Mack sat up front with his team and absolutely loved it.  One of the men broke a bat over his leg and then broke a bat behind his back.

Well, during the giveaways the guy announcing said, “#11 on the fifth row back, come on up here.”  Well, #11 on the fifth row back was MACK!  He got part of the bat that the guy had broken.  And Mack thought that was so cool!  His coach was so kind to make sure Mack also got the men to sign the bat.  Pretty cool!  Mack said the coach told the guys that he was one of the most Christ-like kids on the team.  Awwww…proud mom moment, for sure.

So, now our flag football season is officially over, so until next season……. 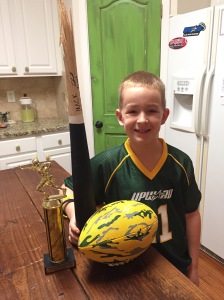