As I mentioned before, May has been a whirlwind so far.  We best hold on to our hats because we’re only a little over a week in.  There’s more crazy stuff to come, but for now, let me just try and get the old blog up to speed. 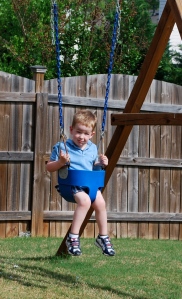 Do you think it’s time to move Mack up to a big boy swing?  When a kid’s feet can touch the ground from the baby swing, I think the answer is pretty clear. 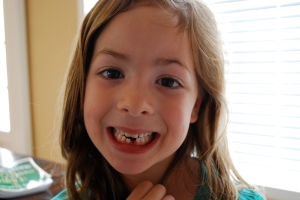 Molly has since lost the other tooth on her bottom row.  She loves, loves, loves losing teeth.

Josh brought these little hat things back from his trip to the Middle East.  I didn’t really mention that he was gone for logical reasons, but he is back now.  We are so happy!!  He had a great trip.  The kids heads are all a bit too big for how the hats are supposed to fit.  We weren’t surprised.

We went to church on Saturday night for Easter; Josh stayed home with the kids Sunday morning recuperating from his travels (and everyone wore their hat and watched a movie).  I worked in the preschool department Easter morning.  I guess since everything this year was so NON traditional, I just didn’t even think once about taking a picture of the kids in their outfits.  And maybe because they weren’t new outfits either.  Like I said, very NON traditional.  We did eat ham for lunch!  That has to count. 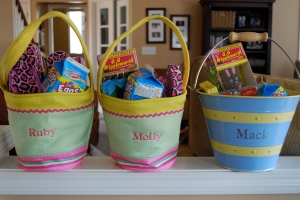 And we did manage to have some treats for the kiddos.

We got a fun box in the mail from PawPaw…Easter treats for all and Mother’s Day gifts for me. 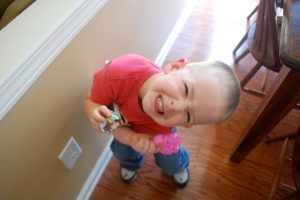 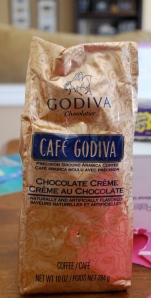 After I ate a Cadbury egg, I delighted in seeing this coffee bag!  Yum.

The kids have spent a lot of time outside.  I found this adorable bird picture by Ruby the other day:

And changing the subject, we went to Augusta for Friday and Saturday.  I had so much fun!  We woke up Saturday morning and my sisters and me went to breakfast with my mom.  It was so fun to talk and talk and drink a ton of coffee together.  Then, my mom and I went to Target and roamed around.  That was so fun.  We got back home, watched the kids play for a little bit, Marcy and I went and got lunch for everyone, came back for about an hour and then I went to Old Navy and LifeWay with Cacy and my mom.  Josh watched the kids all day long with a smile on his face.  He also had already gotten my Mother’s Day gifts and cards all ready so that he wasn’t scrambling around at the last minute.  That made me proud.  🙂

When PawPaw and Sweetie were getting ready to go to a wedding Saturday night, Mack was asking where PawPaw was.  I told him he was in the back getting ready.  Then, Mack said, “He is so great.  I just love him.”  Isn’t that so sweet?

We drove home Saturday night, threw the kids in bed and woke up to a beautiful morning.  The kids each gave me a card, I got some stationary, money and a fabulous gift card to the spa.  Yipee.  I cannot wait to use it!  Josh was so kind and thoughtful.  We came home after church, changed real quick and took off to Piedmont Park.  It was so nice.  It was my first time going there.  The kids played on a great playground, walked around with Uncle Jason a lot, I went on a short walk, everyone played ball and just had fun!  We got home around 7:30 and threw the kids in bed again….we were all exhausted from a full weekend of fun.  I told Josh that I hadn’t had such a fun Mother’s Day ever.  I am sure the cards and gifts were a part of the equation, but I can’t help but think that maybe it was so great because of the ages of the kids.  They are very pleasant these days.  They carry on good conversations, feed themselves, all are very much potty trained, and on and on I could go…..they are growing up!  I like being with them.  Go figure.  And not only have they changed a ton over the last seven years, but so have I.  I know I am not who I could be as a mom, but I am much better than when all of this first started.  I always say that going from no kids to one kid was BY FAR the biggest adjustment.  One to two was interesting, two to three was a lot of work….but the huge changes in life that come with that first one can really be overwhelming.  All seven years have been used by the Lord to bring to light selfishness and pride and some other really ugly stuff.  However, I can see change in my life brought by getting to the end of myself and by being in situations where I just could not do it on my own and being forced (kind of) to admit I needed Him more than I ever realized before.  So motherhood has been very good to me.  The kids are fun (most of the time), they bring great joy (and great frustration), and God has used them to bring me closer to Him.

I think I am also a lot more laid back.  Here’s what my living room looks like just about every day: 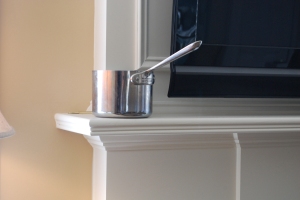 Yes, a pot on my mantle.

Their oven is my couch.

Pots and pans all over the place…and always the request for “JUST ONE MORE THING, PLEEEEEEEASE???????” 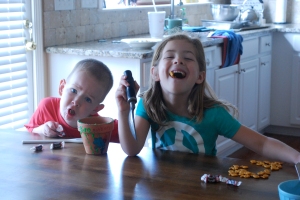 These are the two culprits that really get into the whole “let’s play kitchen in the living room” thing.  An upcoming fishing trip is planned for Mack…he needs to get out of the kitchen….poor boy.

And here is Ruby doing her school work.  Only two more weeks, people.  Two more weeks. I think we can make it.

It’s May and things are crazy.  They are like this every year for every family I know…Mother’s Day, End-of-the-Year programs, Graduations, my mom’s birthday, Josh’s yearly trip out west, organizing curriculum to return, Ruby’s birthday and more!

I apologize for having NO pictures of Easter and NO pictures of Mother’s Day.  I really don’t know what exactly has kept me from grabbing my camera for these special days, but I haven’t.

I do have some stuff to tell about Mother’s Day, Augusta visit and a few random things from around here, but it will have to wait until I get some laundry moving and about 400 pair of shoes back into the proper place.  It may take days, but I hope it just takes a few hours to do some of these house chores and then update the blog on what is going on in our world.   I am sure all three of you are waiting anxiously……just be patient.