We are enjoying the Summer.  We had been spending many days in the sprinkler and in the woods until this “heat wave.”  We were out Monday morning at 8:30, but the kids were “tooooo HOT!!!!!!!!!!!!!!!!,” so we opted for some games and a movie inside.  I was perfectly fine with that!

Here are some shots from our time in the woods.  The kids were digging dirt and filling Ziploc bags with it, digging holes, making mud and more… 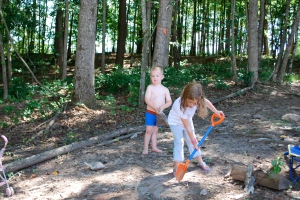 Last night we took the girls to Fox Theatre to see LITTLE HOUSE ON THE PRAIRIE.  I was less than impressed, but that’s ok.  The girls really enjoyed it.  Molly kept calling it “The Foxes Theatre.”  Josh corrected her every time.  In my effort to clear it up, I said, “Molly, like ONE Fox, not lots of Foxes.  Just one fox.”  She then said, “Oh, ok.  When are we at ONE THE FOXES THEATRE?”  That girl is funny.  She also saw popcorn as soon as we ran in the lobby (we were a few minutes late).  As soon as she sat down she said to Josh, “When can we get popcorn?”  To me, a little later, she said, “At the breakdown (meaning intermission) can we get popcorn…pleeeeaaaase?”  This wouldn’t have been so crazy if she had not just eaten a lot of food at OK Cafe AND a huge milkshake!!!  The girl is a bottomless pit. 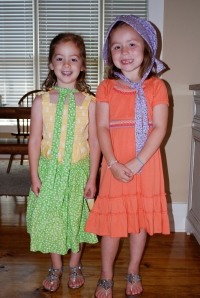 at the house before we left 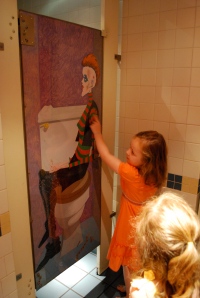 The girls were intrigued by the strange pictures in the bathroom at OK and throughout the whole restaurant.

They were beside themselves most of the night with giggles and laughing and silliness.

Please note where Josh is sitting.  He was to share this strawberry shortcake dessert with Ruby, but she is left-handed and was blocking his ability to get in there with his fork…..clearly a seat change was necessary. 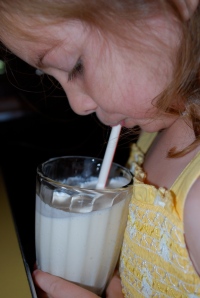 Molly was a true fan and wore her bonnet the entire time.